How do you know when male cats can be neutered? Expand

By six to eight weeks of age, both testes have descended into the scrotum of the male cat and they can be neutered. We fix kittens at 3 months of age or about 3 pounds.

How often do female cats come into heat? Expand

They come into heat every two weeks.  Siamese cats often breed year round. Each heat period varies in length, but typically lasts between five days and three weeks.  She can experience repeated cycles every 12 to 22 days if not pregnant.

​- Puberty in females, on average, occurs between 5 and 9 months of age.

- Pregnancy in cats lasts, on average, about 63 days.

- Litters on average consist of up to four kittens per litter and a typical queen can have two to three litters per year.  She can have anywhere from 50 to 150 kittens in her lifetime.

- Signs of females in heat are:  excessive vocalization, rubbing her head and neck against people and objects, becoming very affectionate, rolling and squirming, making 'treading movements' with her back legs, and assuming the mating position - the rump in the air, tail deflected to the side and back arched downward.

What happens to shelter cats? Expand

- Most cats that enter our nation’s animal pounds and shelters don’t come out alive. Take a cat to a shelter, and she might be adopted or reunited with her owner, but the likelihood is that she will be killed. National statistics show that seven of every ten cats and kittens in shelters are killed there. As for feral cats, nearly 100% are killed in shelters because they aren’t adoptable.

- More cats are killed in shelters than die from any other documented cause. That means more cats die in our sheltering system than from known causes including injury, abuse, disease, or old age. Shelters are supposed to help them, they are not doing a good job for cats.

- Most shelters aren’t required by law to keep track of how many cats they kill. Most shelters don’t report numbers to their state and aren’t held accountable for the cats they’re killing with taxpayer and donor dollars. States that do require reporting typically don’t make those reports accessible to the public. And few shelters voluntarily reveal the number of animals they kill.

- The policies of the shelter system for cats and kittens are not aligned with what Americans want. The majority of Americans believe it is more humane to leave a cat outside than to have her caught and killed. The shelter system provides poor justifications for killing healthy animals, like “We kill them to alleviate future suffering” or “we kill them because we don’t have any room for them; where will they go instead?” But, there’s nothing “necessary” about killing healthy animals.  Killing for convenience is unacceptable to the majority of people. People want humane solutions.

Can feral cats be tamed, rehomed or adopted as inside cats? Expand
Many of the cats considered feral, wild, never dealt with people etc. are just that. These cats are rarely adopted or tamed. However, some of these cats deemed feral that live in colonies have been dropped off and at sometime in there life's have dealt with humans. Other feral cats  that have been around humans since birth can be very friendly and very adoptable. This happens a lot with colonies around restaurants the feral cat has kittens before a spay. The employees will take them home and keep them from the time they are weaned from the mother. Additionally, the feral kittens are caught and neutered at 3 months then fostered and either adopted or moved to no kill shelters.
The link will take you to a site that expounds on this subject:
https://iheartcats.com/6-steps-taming-semi-feral-cat/
How can I tell if a cat is part of the TNVR program? Expand 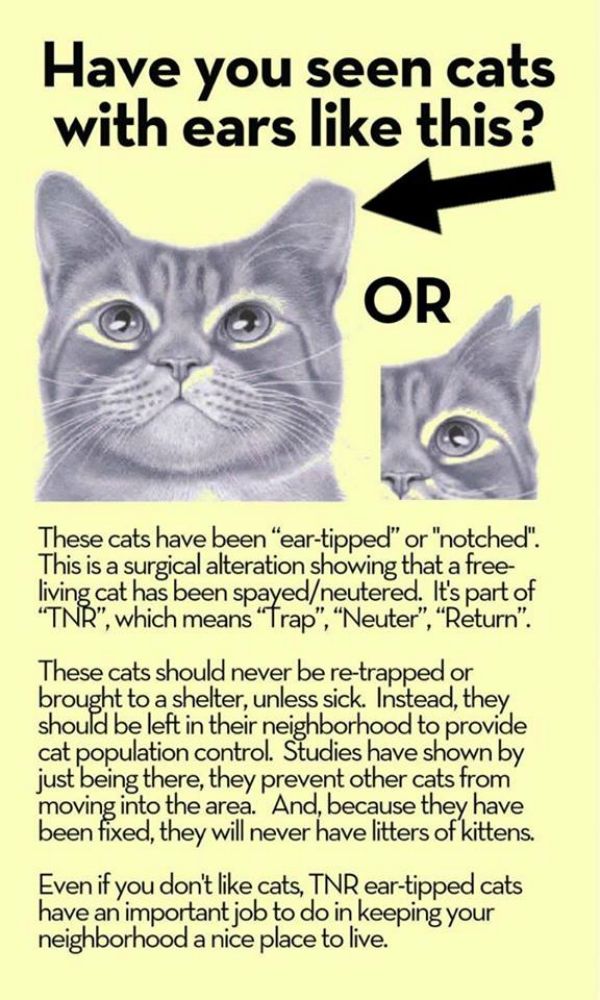 How can I help? Expand

Please help us stop the heartbreak of overpopulation of cats and kittens; spay and neuter your cat.  We offer two weekly low-cost spay and neuter clinics in both Horry and Georgetown Counties.

​Saving one cat by one person will not change the world, but it will change the world for that one cat.  You have the power to make a difference.  Please support our efforts and make a donation to help us keep these low-cost clinics available.

What should I do if my cat goes missing? Expand

Cats are typically hiding under porches, cars or objects near their homes. 75% were found within 1/3 mile from their home. 18% were hiding outside the entrance to their home. A major finding of the study was the importance of an active physical search; 59% were found alive because people looked for them including under bushes. Too often people call off the search prematurely. Cats can be trapped in someone’s garage or building. 56% of the animals were found within 2 months.